Using Auto Layout in Interface Builder can prove trying. While it works reasonably well when you declare constraints on simple views hierarchies, Auto Layout in IB has a couple of major limitations.

“Constraints: The coolest technology in 10.7 masked by the WORST interface editor ever inflicted on humans.” – Wil Shipley

There must be a better way.

You saw code like this in our previous tutorial on Auto Layout:

It’s a little verbose and difficult to tell which item is constrained to which. Is the accept button to the left of the cancel button or to the right? How far apart are they? It’s difficult to tell at a glance with this code.

There must be a better way.

Defining Constraints in Code with the Visual Format Language

There is a better way. With Auto Layout there is a third option that lies between the visual setup in Interface Builder and the powerful code and the ability to define constraints in code. This third option is the Visual Format Language. The Visual Format Language is inspired by ASCII art, allowing you to use text to visually define layout in code. This approach provides a great balance between simplicity of setup and the power of defining constraints in code. To see how it works you will create a new Xcode project to kick the tires. 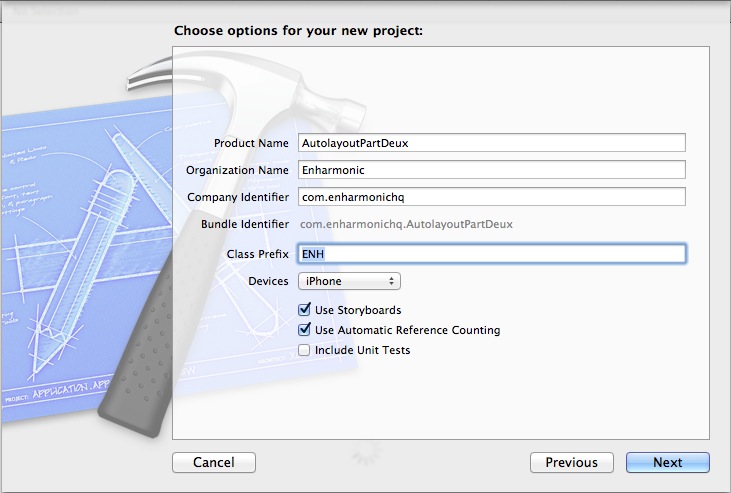 Open Xcode and create a new Single View project, call it AutolayoutPartDeux, use a class prefix of ENH, target the app for iPhone only, use Storyboards and use ARC. 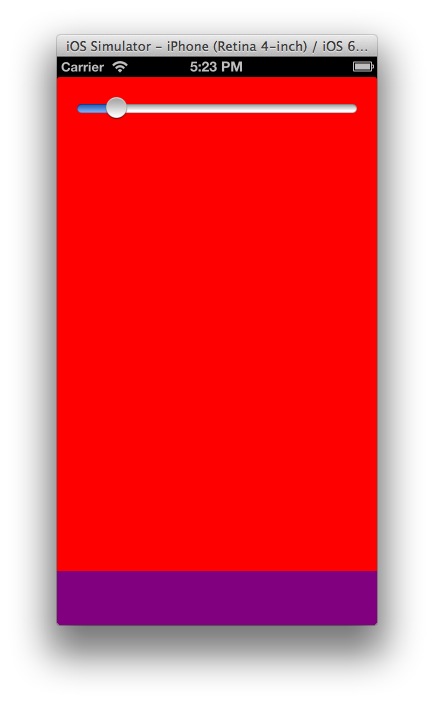 The application you will build will have two views, one above the other. You will use ASCII art strings to set constraints between the two views so that when one resizes, the other also resizes so that together they always fill their superview. The user will be able to control the relative size of the views with a UISlider as shown above. 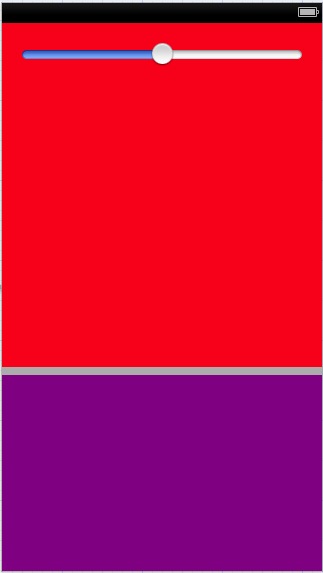 Open MainStoryboard.storyboard and create the basic layout above. Fill roughly two thirds of the top of the view controller’s view with a red UIView and fill the remaining third with a purple UIView. It is okay if there is some space between them. You will take care of their actual layout in code using constraints. 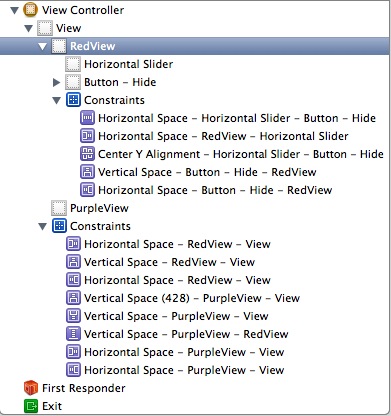 Let IB make whatever constraints it wants to make. You will replace most of them in code later. The constraints might look sort of like the above.

Select the UISlider and set its minimum value to 0 and maximum value to 480 as in the screenshot below. The slider will control the height of the red view.

Now you will create some IBOutlets and a couple of other properties you will need later. Open ENHViewController.m and add the following properties to its class extension. Connect the IBOutlets to their corresponding views.

In the code above, you are first removing the existing constraints that were setup by interface builder. Next, the visual format string needs an NSDictionary to translate the strings used to represent the views within to actual objects. The dictionary consists of keys, the strings used within the format string, and values, their corresponding views. The NSDictionaryOfVariableBindings () macro helpfully creates a views dictionary using the names of local variables in your code as key strings. In the example above, the dictionary viewsDictionary object would translate to this:

You can also construct a views dictionary manually if you prefer to use strings other than your variable names in the visual format strings. The NSDictionaryOfVariableBindings macro is just a convenience.

In the next few lines of the above code you create an array of ASCII art strings that you will iterate over to add the constraints to the view. In this code you are creating constraints using the visual formatting language. You are also tracking the last format string’s array. Once you reach the end of the for loop, the value of the lastConstraintArray variable will be set to the array of constraints for the ‘[NSString stringWithFormat:@”V:|[_redView(>=80@1000)][_purpleView(==%@@%@)]|”, @(floorf([self.slider value])), @(UILayoutPriorityDefaultHigh)]’ string.

Other members of the UILayoutPriority enum can be found in NSLayoutConstraint.h.

Here is some code similar to the above written using the ASCII art inspired visual format language:

You can even define multiple predicates at a time. If you wanted someOtherButton to be at least 80 but not greater than 90 points wide, you could use a predicate like this one "[someOtherButton(>=80,<=90>)]".

Note: the above is an adapted version of Apple’s example from the Auto Layout Programming Guide: Constraint Fundamentals

Add the following code below the bottom of viewDidLoad.

Build and run. You should see UI that looks like the screenshot below. Note: the slider will not yet cause any visual behavior.

Now implement the following IBAction and wire-up the slider.

In updateViewConstraints you set the interestingConstraint‘s constant property to the current floored value of the slider. This will cause the height of the views to change. Ironically, the only attribute of a NSConstraint that you can change after initialization is its constant attribute.

Build and run. The slider should cause the views to resize. The purple view will stick to the bottom of the red view and the red view will never get any shorter than 80 points.

Unfortunately, constraints have no animatable properties, but it is still relatively easy to animate the constant property’s value using implicit UIView animation.

First, open the storyboard and uncheck the the slider’s update events checkbox. This will cause the slider to send its IBAction only after the user has “let go” of the slider.

Now open ENHViewController.m and change the sliderChanged: method to look like the below.

Build and run. The views should animate when you move the slider and lift your finger.

With the app running, now try moving the slider while the views are animating. You cant. Unfortunately, the constraint animations are blocking the main thread. Animating the constraint with UIView implicit animation is very easy, but it can quickly provide a bad user experience because the interface becomes unresponsive.

You will now implement updating the constraint on an asynchronous background Grand Central Dispatch queue.

First open the storyboard, select the slider, and undo the change you made in the previous section. 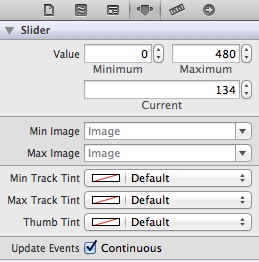 Now open ENHViewController.m and add the following private instance variables to the implementation.

Now implement the startTimer and stopTimer methods below. You will be calling these methods from a background thread, so you wrap the code in each in a @synchronized(self).

Now you will write a method to initialize your timer. Add the following method.

Then, the event handler is created with dispatch_source_set_event_handler call.

The targetConstant is the constant value you would like to animate to over time.

Every approximately 1/30th of a second add the difference between the current constant and the target constant times .234. This will cause the animation to be fast at first, then slower as it nears the target.

Otherwise, stop the animation by stopping the timer.

All that is left is to initialize the timer in viewDidLoad by calling initTimer.

Auto Layout autolayout Development iOS iPad iPhone
This entry was posted on Tuesday, November 12th, 2013 at 5:01 pm and is filed under Blog, Development, Tutorial. You can follow any responses to this entry through the RSS 2.0 feed. You can leave a response, or trackback from your own site.